Coming in to land…

When the weather is fine I like to head down to Rickett’s Point along coastal Beaumaris in Port Philip Bay. At the Point on the rocks is a regular roosting spot for Crested Terns, Silver Gulls and the large Pacific Gulls. On this visit I sat on the rocks close to the colony and watched the juveniles preening and waiting for the adults to come back with food. The terns allowed me to crawl quite close and as  long as I sat down and kept still, they were quite calm and did not flush. As the tide got higher several moved to new rocks and I took the opportunity to practice my flight and tracking shots.    It can be quite difficult to get a clean sequence. A number of shots were not added due to being cut off at the top. To try and get clean shots my settings were 1/6400, F5.6, ISO640 313mm (full zoom of 400mm was too close for a complete image) – with the abundant sunlight I should have shot a much lower ISO but I wanted to crank up the speed to get the detail in the  feathers. I shot over 400 images in an hour of observation, which is always fun (not) to trawl through later and look for gems. 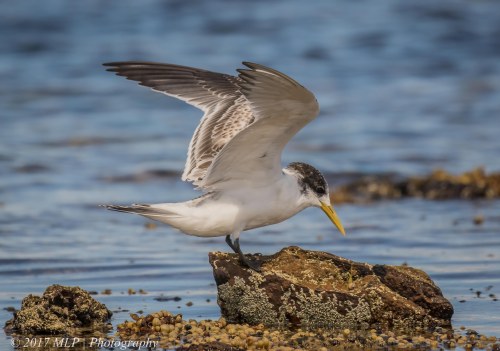 A master fisherman takes a break…

On a walk along the Elwood foreshore with a few photography/birding friends we found this Crested Tern on the stone pier. We have often seen Crested Terns here and this one was quite comfortable with us walking up quite close to take a few photos. Later when reviewing the images I noticed that it had been tagged. I have photographed another Crested Tern last year that was also tagged. The Tern’s scientific name is Thalasseus bergii  – Thalasseus from Greek “fisherman” and Bergius, a German museum specimen collector , from the early 1800’s. 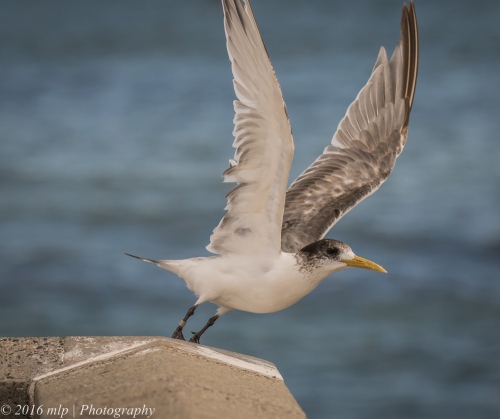 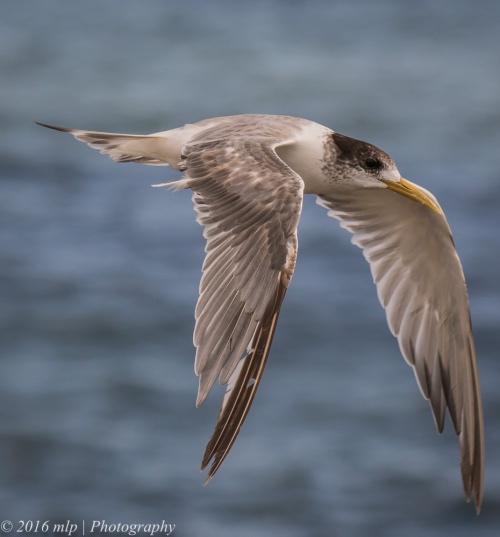 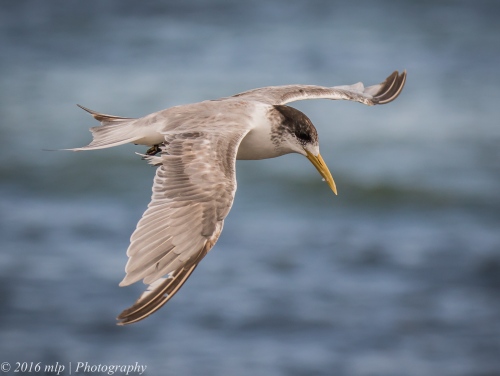 The Tagged Tern of Stone Pier

This Crested Tern appears to be a regular visitor to the Elwood Beach Stone Pier. I saw him when I visited the beach recently to take shots across Port Phillip Bay. The Tern is tagged with a metal band. It must be a good hunter – whenever it went up to look into the water for fish, several waiting Silver Gulls followed it very closely – hoping to steal his catch. I failed miserably to take any flight shots as he was just too close for my lens (and skill level) and I was shooting wildly, staggering around the pier like a drunken sailor. After a while he rested on the stone wall and waited in hope that a  fisherman would throw some bait his way.

Along Beach Rd at Beaumaris is a rocky platform that becomes exposed at low tide and is a favourite roosting spot for Silver Gulls, Crested Terns, Cormorants, Swans and Pelicans. Many other birds also stop by at times but these seem to be the main ones that are often here.

I always check the platform as I drive past and yesterday I noticed that it was visible with quite a few birds around. The carpark is only several meters from the edge of the rocks and screened by low salt bush so it is easy to get your gear ready and walk slowly onto the platform without spooking the birds. They are generally used to people and just move a bit further away. The best time to go is weekdays as the weekend and good warm weather guarantees lots of people visiting the area. 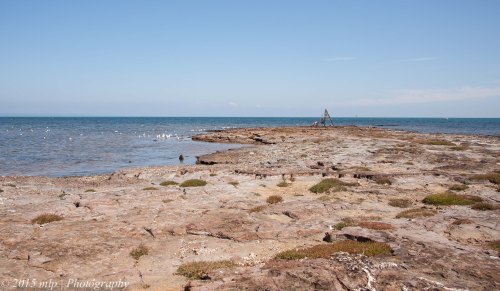 Ricketts Point, Beaumaris – at the end of my visit, two skin divers set up their hunting gear at the point tower and finally spooked the birds. 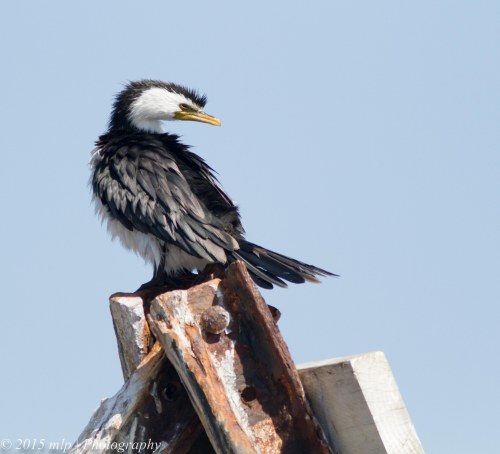 Little Pied Cormorant II – dry and fluffed up after preening

Australian Pelican – the short and tall of it…a few of the pelicans seemed to favour the upright resting position – I have not seen this before.

Pelican – cooling down or drying off a bit 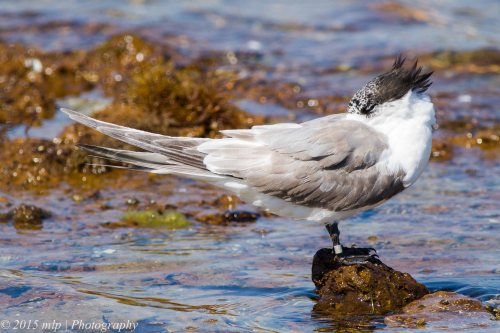 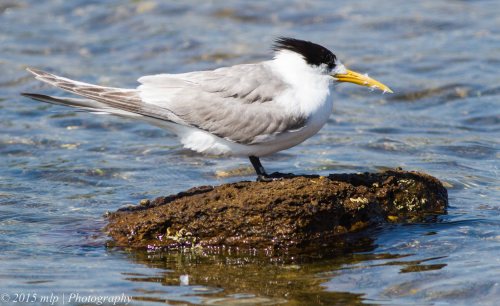 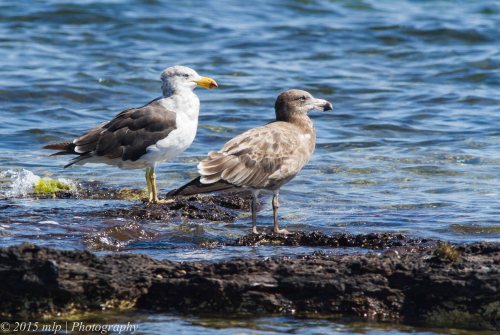 Fishermen in their boat off Ricketts Point

The Pelicans developed an intense interest off shore and all started to watch the 1st year Pacific Gull move towards the fishing boat. One of the fishermen threw some bait or a chunk of fish to the Gull which attempted to bring it back to the rocks to consume. Several of the pelicans took off with a just a few flaps and immediately hounded the Gull in the air until it dropped the prize and one of the pelicans dived down and retrieved it. I have not seen this type of behaviour before –  it is usually the other way round  – maybe they knew the Gull was young and took advantage. 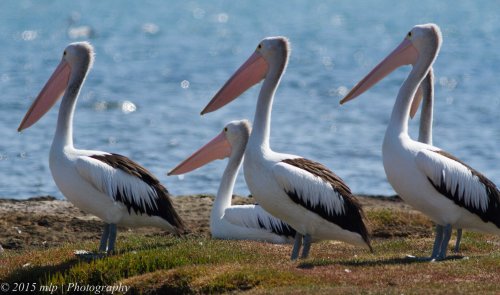 Pelicans with a sudden offshore interest.

Pelican – off to harass the Gull.

When I go to Greens Bush I like to drop in on Flinders back beach as well. There is a pair of resident Hooded Plovers on the beach that are surviving the conditions and the number of people that visit. It is a popular area, with the golf course above and the easy access to the beach at several points for locals and visitors. It is probably the closest point to Melbourne to find the Sooty Oystercatcher, the Hooded Plover and a good chance for the Black Faced Cormorant (though I have not seen them there yet).  I visited twice on the weekend, once at high tide and again at low tide. At high tide the birds rest and groom at the high water mark waiting for the tide to turn and occasionally run into the waters edge for anything juicy that may become exposed or washed up. 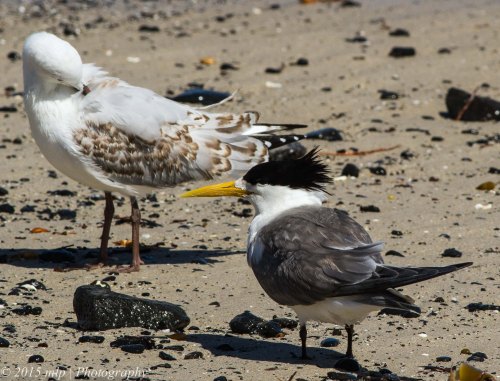 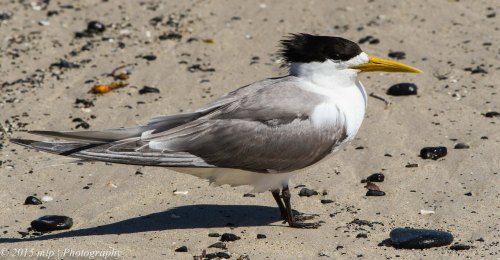 The Hooded Plover is a closely monitored bird. It is endangered in many areas along the Australian coastline due to housing and commercial development and land clearing.  It is particularly vulnerable to beach users especially dog owners. It lives and hunts on the sand and nests in scrapes amongst the sea weed at the high water mark or at the base of the dunes. It is hunted by cats, foxes and other predators and the nests are often disturbed or destroyed by walkers and dogs. Some councils will rope off areas when Plovers are nesting but so far I have only seen the Mallacoota council do this at Betka Beach. (On a busy day people did seem to stay clear of the ropes and the signs.) It is too bad that other councils don’t try it as well. 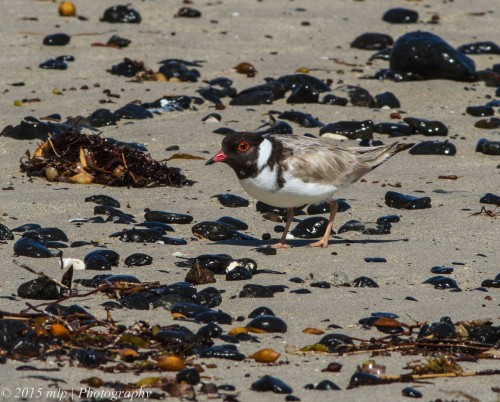 Hooded Plover II – hunkered down against the wind with plumage that helps camouflage against predators.

Associating closely with the Hooded Plover was a Double Banded Plover. Due to its size I had thought it was a Juvenile Hooded Plover but I am happy to be corrected. 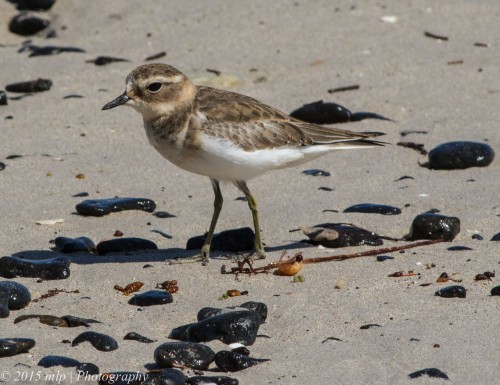