On a visit to the Western Treatment Plant we stopped at the Crake pit in T-Section which due to intermittent rain has maintained a water level that is perfect for several species of Crake. Along with watching and photographing the crakes we heard a Growling Grass Frog – a frog becoming more rare and endangered in many areas of Southern Australia including Victoria. It is also called the Southern Bell Frog and rather unkindly: the Warty Swamp Frog. I quite like the name Growling Grass Frog. It has a deep drawn out call and you assume it is a larger frog but when seen it not very big at all. Recently I started to record sounds of various birds and pretty much anything else I could get close to. I have found that there are very few areas that don’t have man-made noise pollution in the background – freeways near wetlands, boats along the coast, distant chainsaws and trail bikes far out in the forests. Luckily in this case the background sounds were two rather melodic birds: the Australian Reed Warbler and a Little Grassbird.

Click on the play button to hear the Growling Grass Frog 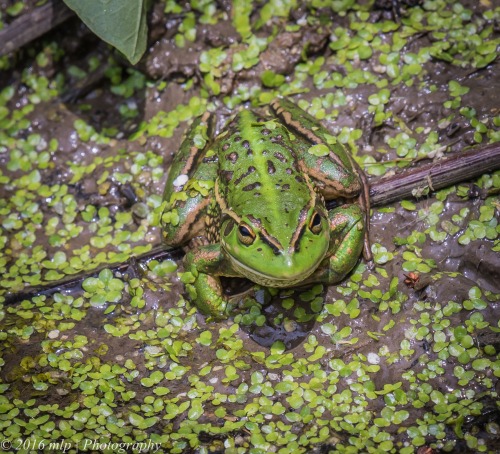 8 responses to “A Growling Grass Frog”