While driving through the Mallacoota township heading out for an early morning walk at Double Creek, I spotted a large bird sitting on the front grass of a roadside home. Due to a bit of early morning mental slowness, I drove past, attempting to catalogue the bird and then realised that I could not identify it. I panicked and pulling over quickly, jumping out with the binoculars to have a closer look. I still could not identify the bird so I grabbed the camera. By walking carefully I managed to get quite close for a few low light photos. I pushed my luck and the bird finally flew up and back into the bushes in the front yard. With the visible striped tail feathers I guessed it was a cuckoo of some sort and that it seemed to be quite passively waiting to be fed. I could hear a few Red Wattlebirds nearby. I continued on my day and later tried to ID what the bird might have been. I was hoping for a lifer and tried to turn it into something I had not seen before but in the end I decided it was a juvenile Eastern Koel, a large cuckoo with a loud call that many residential communities find annoying especially in the middle of the night. While not uncommon for the area, I have only seen dark males high in the trees and of course heard them. It was my first decent photo of one and I learnt about the species while researching: Males are a glossy black, it is a migratory species that arrives in spring in Australia from South-east Asia (Indonesia & New Guinea), adults have bright red eyes and the juveniles have black eyes, while Mallacoota is well south of their usual range down to Mid NSW – they are now quite common in Canberra and thanks to climate change, a few regulars make it to Melbourne, the male’s call is a loud ascending whistle or “koo-el”, being a parasitic bird it lays eggs in other bird species nests: red wattlebird, magpie-lark, friarbirds and figbirds.  It is also called a Pacific or Common Koel, cooee bird, rain bird and storm bird. 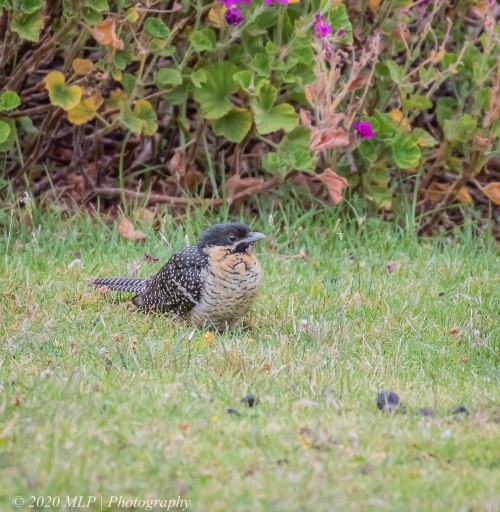