Recently I spent a few days in central Victoria around the Daylesford and Newstead areas. I saw quite a few Long Billed Corellas ( a type of white cockatoo). There are two types of Corellas that we can find in Victoria – The Long Billed and the Little Corella. (Little Corellas can sometimes be found within the flocks of Long Billed Corrella as well as in suburban and country areas. Last Summer we had over 400 in our neighbourhood that roosted in the large Gum trees each night.) The Long Billed Corella tend to be found in the open dry country areas. The flock of Corellas below were in a farmers paddock and at the Jubilee Lake Caravan Park outside of Daylesford.

They are a gregarious bird with a lot of personality and quite fun to watch for a while as they feed, quarrel and move around. The sharp long bill is used to dig up weeds and grass to get access to the roots. They can damage a football or cricket oval quite quickly and extensively as they move around in flocks of several hundred. The can make quite a noise as well. 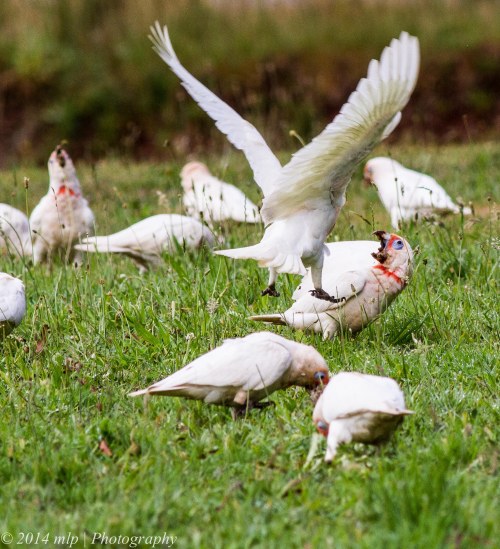