A flock of Gang-gang Cockatoos have been seen throughout the local suburbs, visiting parks and looking for food. They are usually found around inland mountain forests not along bayside beach suburbs. While walking my dog, I found four in a tall gum tree along the creek behind my house. They were squabbling with the local Magpies and Currawongs. I rushed home to get my camera gear to see if I could get a few shots of my first local sighting and only my third sighting in the last 10 years.  The flock had moved on but I did find a lone female Gang-gang feeding on green seed pods in the lower branch of a large tree at the other side of the old golf course. I watched for a while as she ate green seeds and then napped briefly, roused and ate more. After 30 mins or so the other members of her flock flew along the creek calling, she joined them and they headed further down the coast. I have not seen them since. 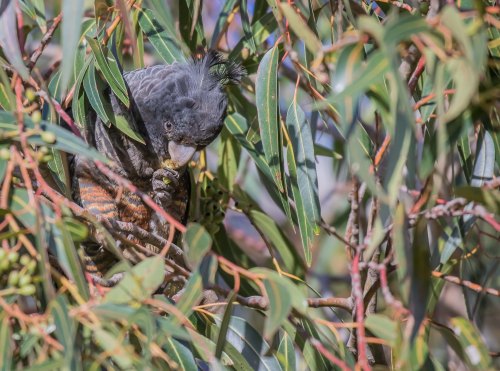 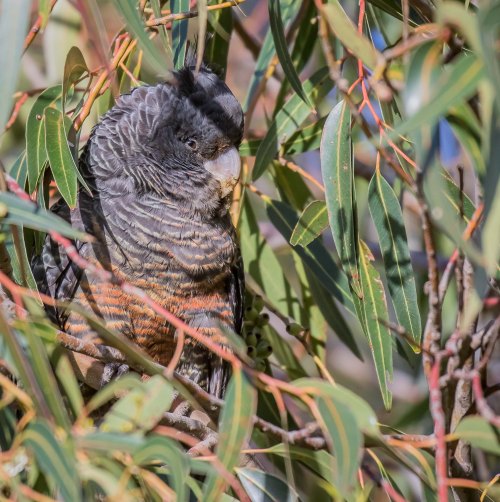 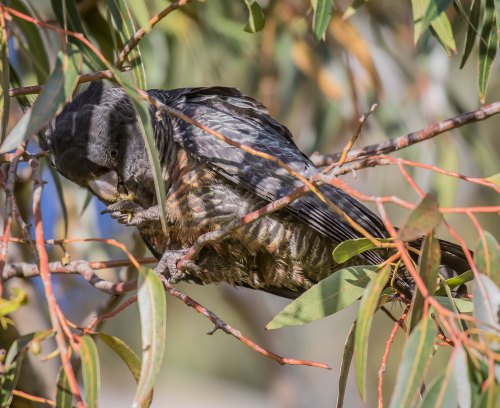 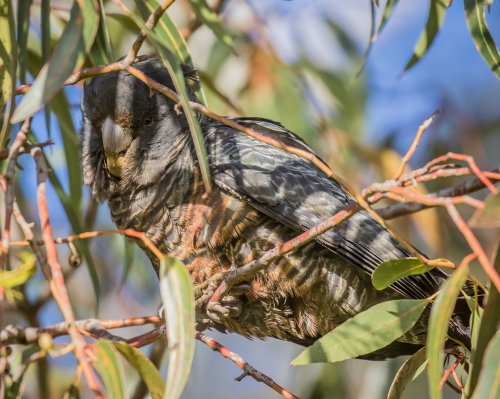 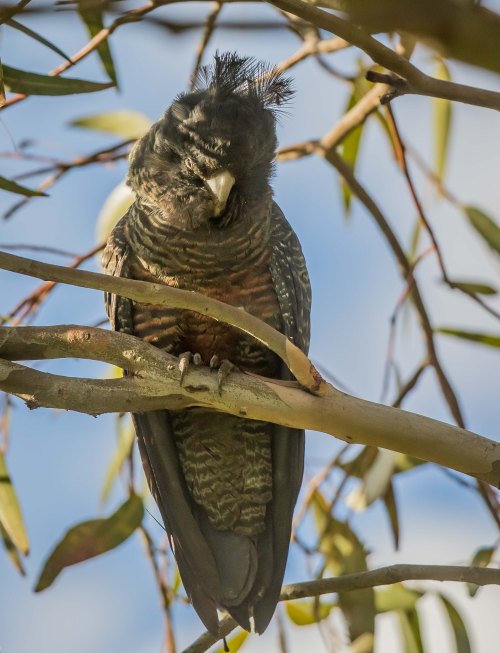 There is something special about Gang Gang Cockatoos. They are rarely seen, sound like creaky hinges and are not as raucous or as gregarious as other cockatoos. They are usually found higher up in the taller trees. I have only seen them a few times in my life and the first was when I was 19, camping on my own at the Cathedral Ranges north of the Black Spur. The male’s bright red head had always made an impression on me. It was many years before I saw another one.

On the last day of birding on my recent Easter trip to the Bellarine region of Victoria, I got up early and drove down the coastline to Anglesea Heath. It is a vast region of heathland, scrub and trees. It has many tracks to explore and I gave the Liberty Outback a real bush bashing. In the middle of the park is a coal mine and a power station – quite strange to find and hear. Where I stopped the car to look at the power station and view a roadside sign and map, I noticed bits of seeds and leaves dropping onto me and the car. In the tree above me was a small flock of Gang Gang Cockatoos – several females and at least one brightly headed male. The male was taking a nap while the girls chewed on the gum nuts. They were not very far off the ground and I had a good chance to take a few pics between the branches. They were not bothered by me at all. 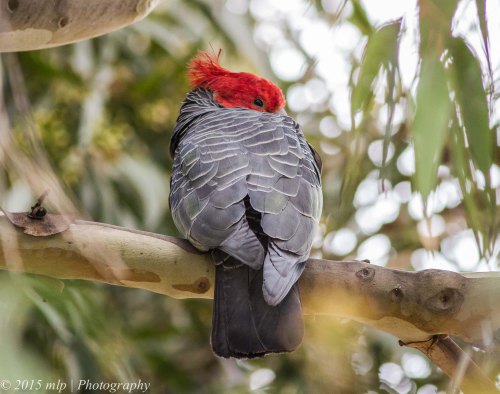 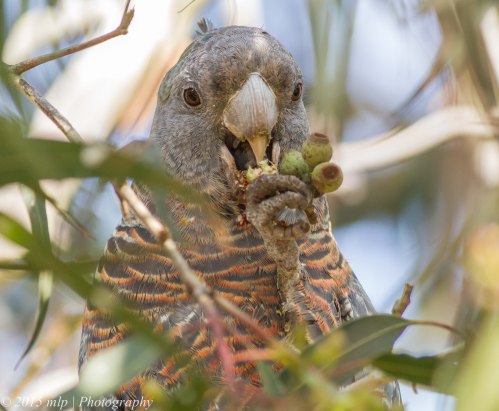 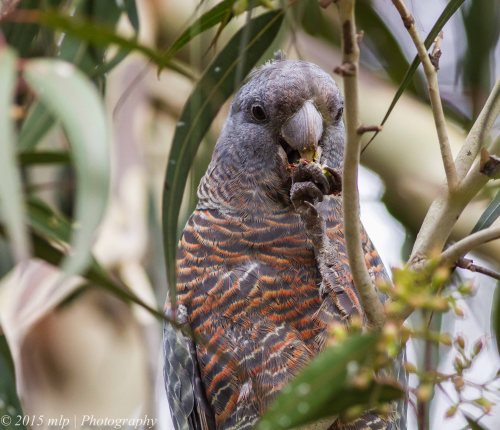 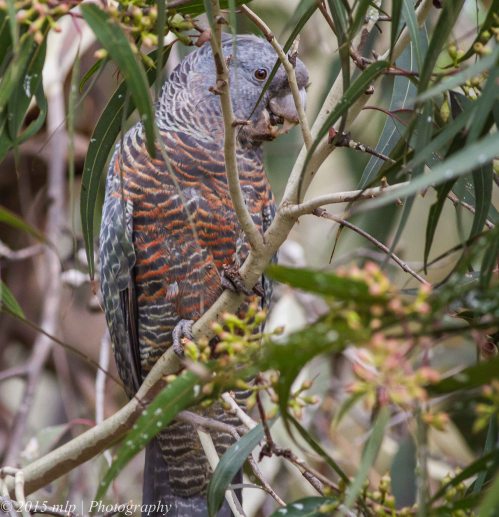 On the way home we decided to visit the Garden of St Erth, one of the Diggers Club Garden and Nursery sites – an open pollenated seed company specialising in heirloom species. Being out in the bush there is always a good chance of finding some good birds. I had to race back to the car to get binoculars and camera (after having promised to just look at gardening stuff) and to take some average canopy shots of two Gang Gang Cockatoos. An uncommon species that prefers higher altitudes and wetter forests.  It was only my third sighting of this species. As typical of cockatoos they are a generally long lived species, very smart and gregarious. The Gang Gangs don’t seem to live in the large colonies that the Corellas and Sulphur Crested Cockatoos live in. I have only seen them in pairs though this was a groups of two pairs. As I watched they bickered, groomed and teased each other. The male has the bright red head and their calls sound like a creaky gate. 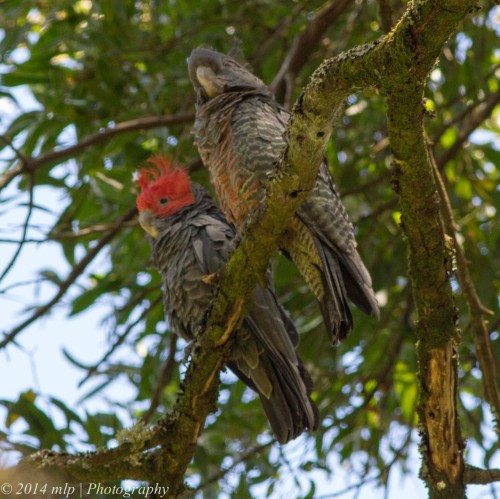 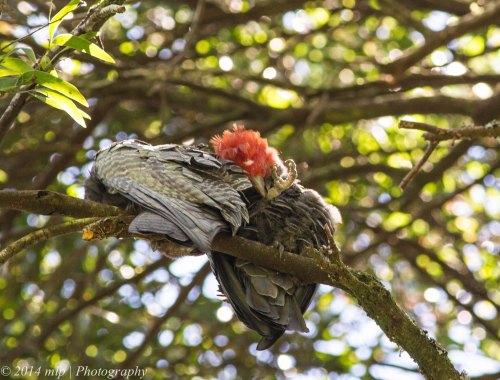 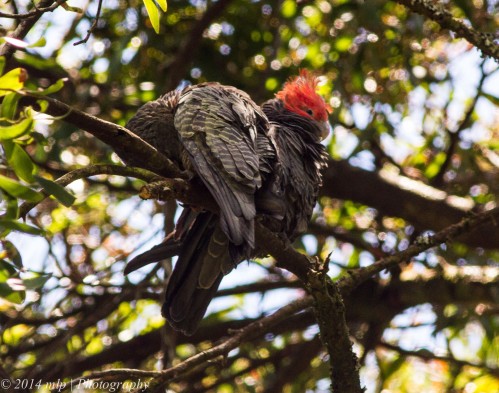 On the way home we drove through the Wombat State Forest (Lederderg Road) and spotted several young Blue Winged Parrots feeding on grass seeds along the roadside. 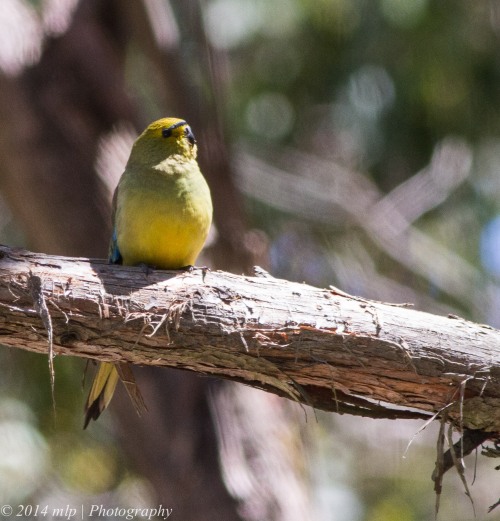