Frustrating squeaks can mark the spot…

I carry a bit gear when I am bushwalking looking for birds and good photo opportunities. All sorts of bits and pieces hanging off me can occasionally squeak while I walk and has often fooled me into thinking that a small bird is near by. On this occasion I was wandering down Konardin Track (Hattah Kulkyne National Park) and had gone off-track a bit watching two bright pink Major Mitchell Cockatoos. I heard a very light squeak and dismissed it as my gear. As I moved around an area to check for emu-wrens and sometimes just standing still to see if I could hear anything else, I heard the squeak again and this time thought my nose was whistling as I was breathing. I stood still, I froze and then held my breath but soon heard three quick squeaks. That’s it! There is something here with me amongst the spinifex and mallee bushes. I stayed still and prepped my camera very carefully. From the corner of my eye a female Chestnut Quail-thrush popped into the open and started to feed along the ground. Even when scared this species seems to bolt along the ground and hide rather than fly away from an area. As I took a few photos another came into my vision and followed the first. It got a little too close to the first and there was a stand-up altercation, the pair separated a bit and continued to feed. The bird was also lifer 342, and I did my little lifer jig (accompanied by lots of squeaks and rattles). 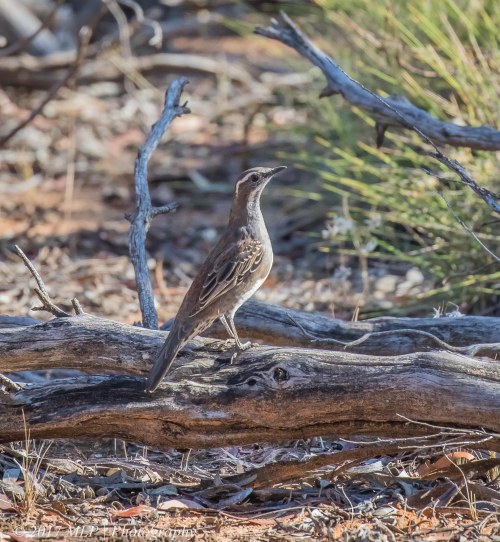 Keeping an eye on me but not very bothered and continued to stay in the open and feed.

4 responses to “Frustrating squeaks can mark the spot…”