On an early morning walk around the Double Creek Nature Walk, near Mallacoota, I came across several birds having a dust bath and soaking in some sun. I watched Eastern Yellow Robins dust bathing followed by a spot of sun baking. It was a prime spot amongst the thick forest and the Robins were moved along by a pair of Lewin’s Honeyeater who spent a bit more time at the baking spot. Normally Lewin’s are a little hard to get near and photograph but as I was slow moving and crouched down they were happy to ignore me and just get on with soaking up the rays.

I have seen several bird species at different locations sun baking: magpies actually lying on their backs in sand on the edge of a golf sand bunker – I thought they were dead until I walked up to have a closer look….not sure who got the bigger fright. I have seen pigeons with a wing in the air lying on the ground and then the Robins and Lewin’s honeyeater at Double Creek. It is not fully understood why birds do this: part of feather maintenance, drying off after a bath (though I watched these birds have a dust bath and not use water), irritating feather mites to help find and remove them, just enjoying the sun on a cool morning. Whatever the reason it was interesting to watch and photograph. 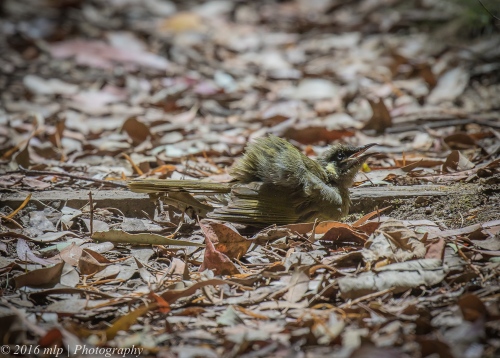 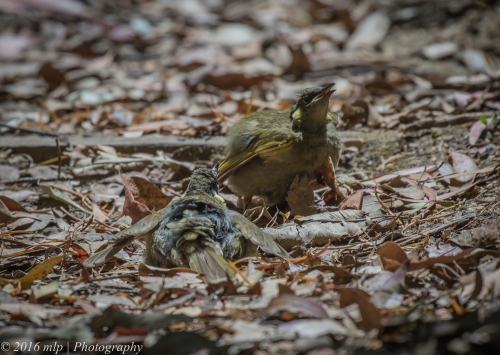