While walking with a friend in Greens Bush recently I found two new Grey Fantail nests, the first empty but the second was occupied by two tiny Fantails. The small goblet shaped nest made of strips of bark, grass and spiderweb has an opening only 4cm wide and 3.5cm deep. (I measured an empty nest). While we watched the nest for a while one of the parents would come back every few minutes with a snack for one of the chicks.

I returned the following week hoping the light would be better but found an empty nest. Standing there looking for any signs I eventually found the chicks above me in the dense foliage. As a parent came near the pair would make high pitched begging chirps but would quickly go quiet when the parent left. It took a while to track the pair back to the chirps through the leaves and branches. 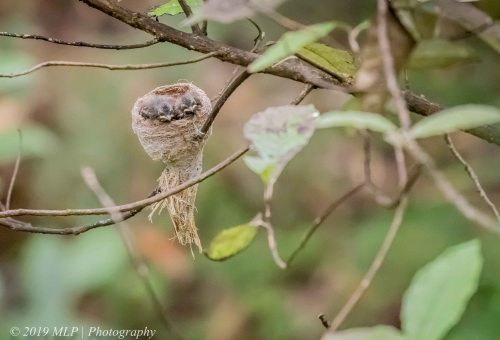